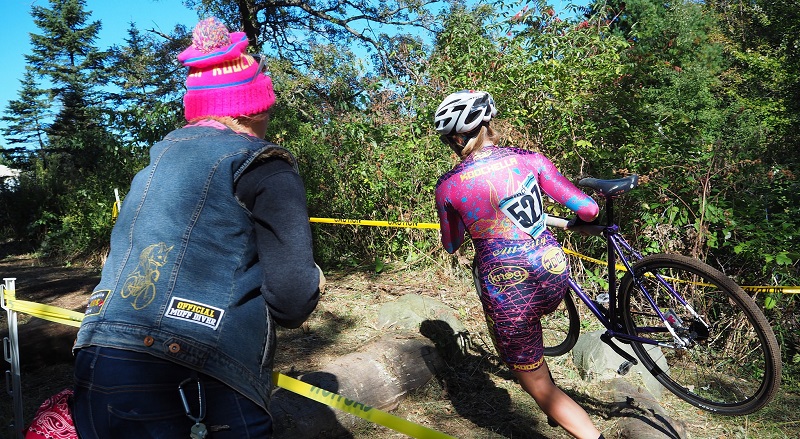 This year’s Baker Orchard extravaganza featured the largest amateur women’s field in the race’s recent history. For Mama Duck Anna Schwinn, lining up with thirty other women had her gushing. 2015 marked Schwinn’s third year racing at Baker Orchard. In 2014 she raced with 12 others, 2013 brought her only five competitors. “This year was freaking amazing,” Schwinn said. 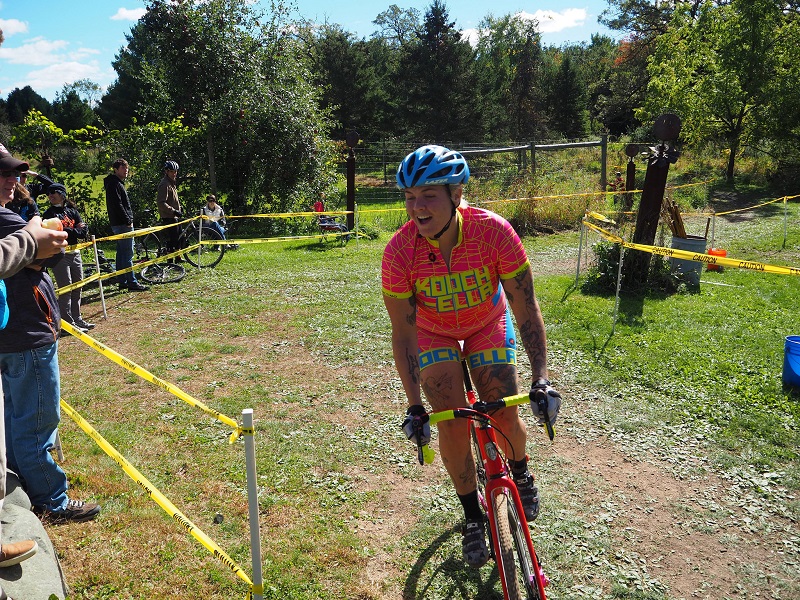 Yet right out of the gate Schwinn’s stellar sprint was foiled by a course post. The crash tangled Mama Duck and a few other babes making Schwinn gush in a slightly different sense of the word.

I didn’t get back on the bike until basically the full field had passed. The rest of the race was spent trying to pass racers- an art as I found out. Despite crashing and sliding out and bleeding during the race, it remains my favorite. The orchard is gorgeous. The crowds are amazing. The community is so fun.

Of course, part of that fun community is Fratboy Lilah Guertin who brought her megaphone and stood at the log stair run-up cheering until she was hoarse. Between heckles Fratboy also raced in the Women’s 3/4 field. 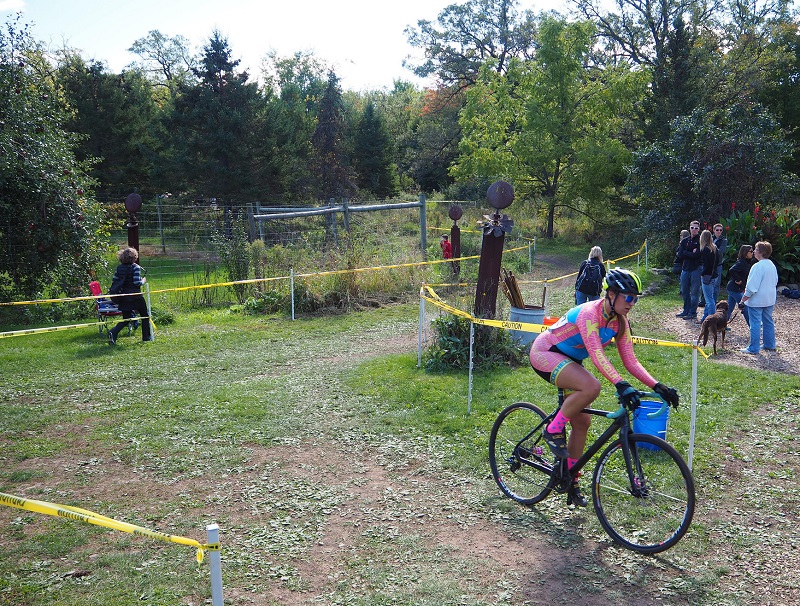 After an immediate crash in my field after the start I had to crank harder into some better positioning. The course was technical but flowing with extremely difficult soft sand and boulders that were higher than 20″. There was a fun wood section through the apple orchard.

As far as what she learned from Donkey Cross 2015, Guertin remarked, “PSI can make or break your race.”

Teammate Tiana “T-Bits” Johnson agreed. “The course felt like little hands coming out of the mud, grabbing at your tires,” she said. “It was soul destroying.”

The course’s beauty almost made up for it. “I loved riding the course!” Renee “Dark Horse” Hoppe said. Donkey Cross was Hoppe’s third sanctioned cross race. Though still new to the discipline, Renee fought her way to 11th place, narrowly missing a top ten finish in the Women’s 3/4 field. 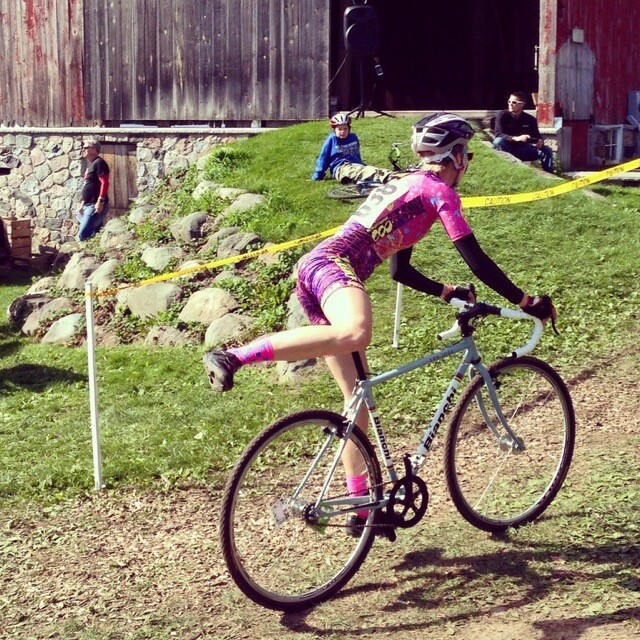 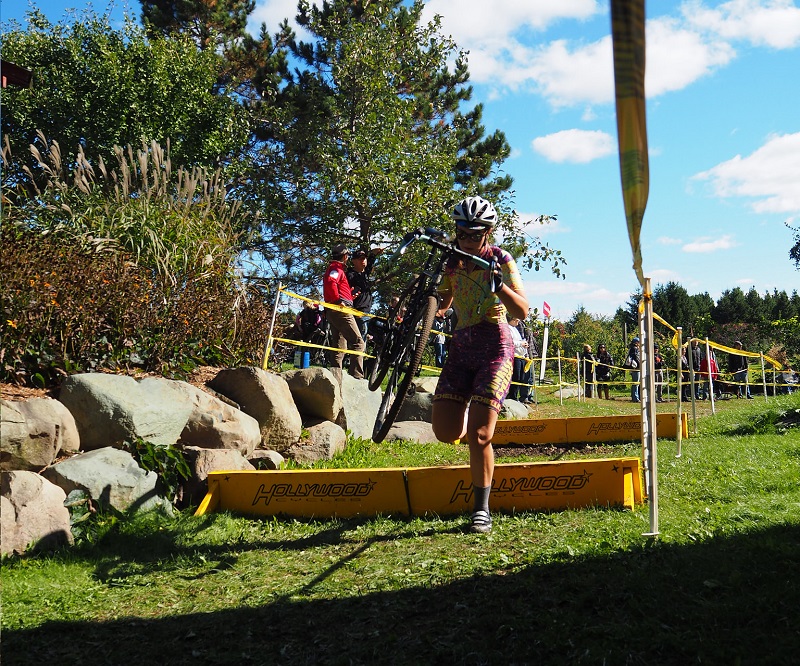 Also new to cross, Emily “Eagle Screech” Wade was pleased just to finish her second sanctioned race ahead of a handful of riders.

I can tell that I’m still not on a level where I’m pushing myself as much as I know I can. But, with practice I’m becoming more confident. We’re lucky to have support from our teammates, our coach Drew, and local crusher Deidre Ribbons. Last Tuesday Deidre saw I was struggling with lifting my bike over barriers. She recommended I try a down tube carry and it’s helped me a lot. Still not perfect, but it’s progress.

At Donkey Cross Beth “Treasure” Franklin joined T-Bits in the elite women’s race marking her debut as a Cat 3 racer in cross. “I’ve been intimidated of that Cat 3 upgrade due to the longer race time and the fact I’d be racing (er…at least starting) with the Cat 1/2 elite women,” Franklin said.

Yet Franklin’s quad-bursting pace earned her a spot on the podium.

I didn’t even know I was sitting in 3rd place until Kristi caught up with me midway through the race and the Koochella cheering section started freaking out at the staircase. Kristi overtook me eventually but on the 2nd to last lap I edged her out at the barriers. I found a little something left in my legs and I cranked out my fastest lap of the race. I was honestly banking on getting lapped by the race leader in that lap. If I didn’t get lapped, I knew I’d be screwed; I knew it was unlikely that I would be able to hold onto the 20 second lead I had fought for.

Lucky for Treasure, the race leader passed her on the grassy straight away near the end of the course. Hear more about Beth’s race experience in her post-race interview conducted by the Mama Duck herself: