This past weekend the ladies of Koochella packed up their bikes, sleeping bags, and fireworks (because priorities), and headed out to Wisconsin for a weekend of team bonding and bike racing.

A bonfire was had, Beyonce was danced to, and Pugsleys were ridden off jumps. Most importantly, however, the team had an opportunity to connect and have fun together outside of a race environment. #Koochipatrolcabinretreat was a success. 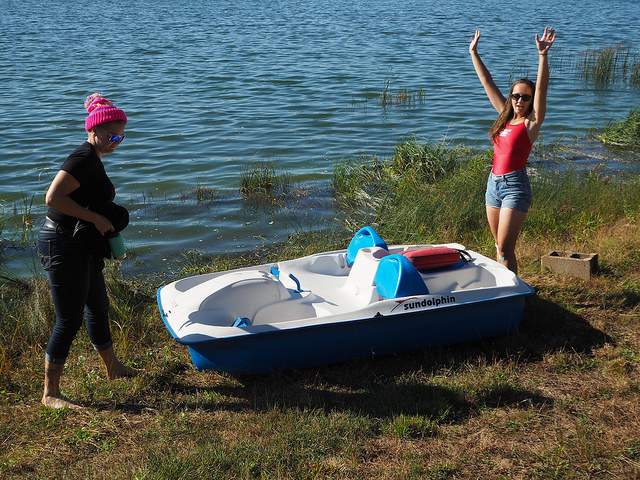 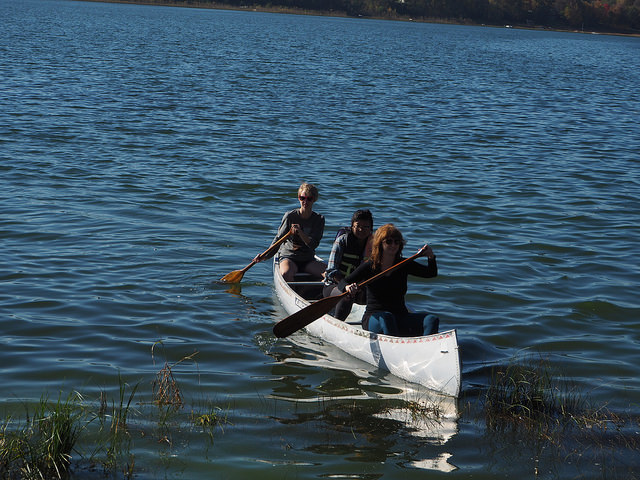 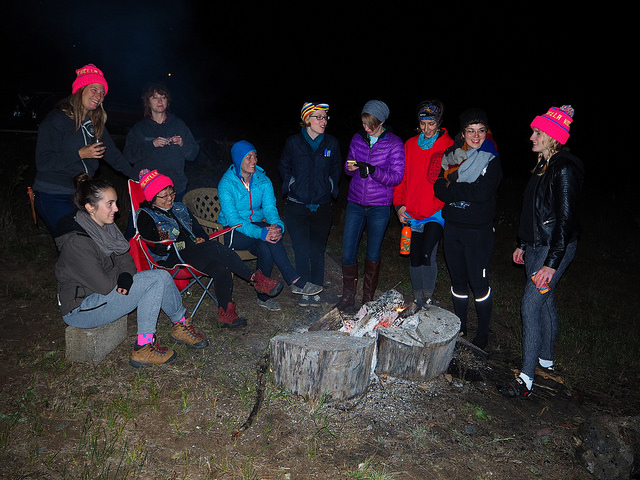 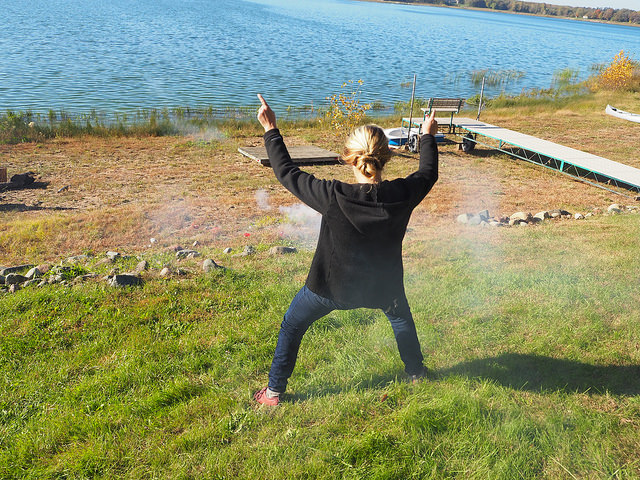 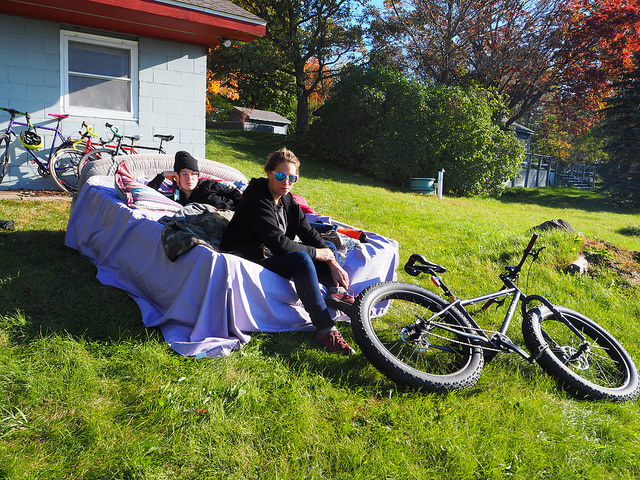 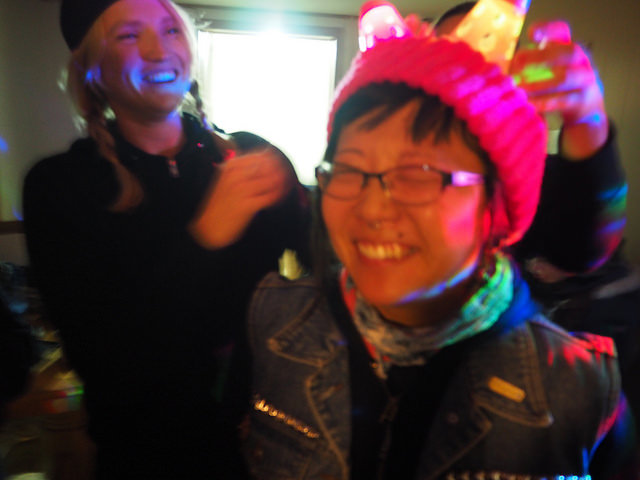 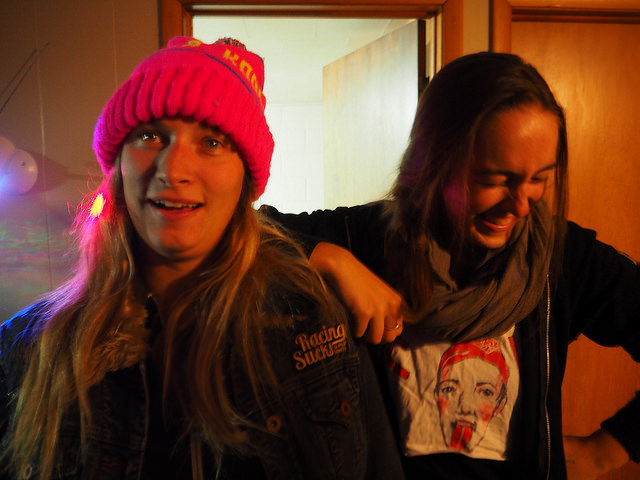 On Saturday morning the team rolled out of bed, ate Beth’s delicious breakfast burritos, and made their way to Jackson Meadow to race. Seven Cat 4 Koochella women lined up to start. For both Sarah “Bee” Bonneville and Laura Schaefer this would be their first sanctioned cyclocross experience. 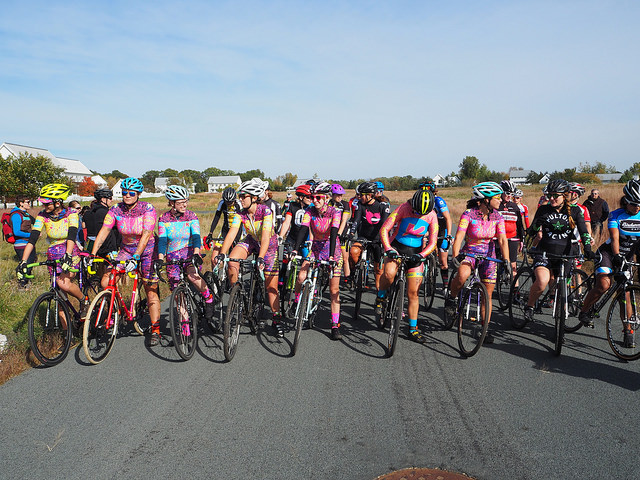 Lining up with everyone was awesome. Our whole team was at the race. We’re all busy and we aren’t often in the same place at the same time. Feeling everyone’s support was really special.

I was excited for the paved straightaway which made me nostalgic for criteriums in the spring. After a great start my left foot unclipped causing me to fall back a bit. I clipped back in and caught the middle of the pack. Yet, as we went around the first turn, I crashed. It was a 90 degree bend on pavement–very much like a crit. I took an inside line and got caught on the wheel of a rider who cut his line in from the outside. Splayed across the pavement I hurriedly grabbed my bike and got back on. “You’re badass!” a voice called from the sidelines.

I was able to catch the end of the field at the first barrier positioned on the uphill right around the corner. Quickly dropped by the main group, I fought my way past a handful of riders and pedaled strong with blood dripping down both my legs.

Anna joined the race at the last second, skeptical about her abilities due to a knee injury. Though the race was difficult and painful for her, she followed me through the course until the end cheering for me and sharing in my pain. Sometimes Anna’s cheering empowered me. Other times I pedaled harder just to try to get away from her. Either way, I was glad to have her behind me, going hard Koochella style. The course was beautiful. Rolling hills through the woods and familiar, smiling faces scattered throughout made the race really fun. -Emily “Eagle Screech” Wade 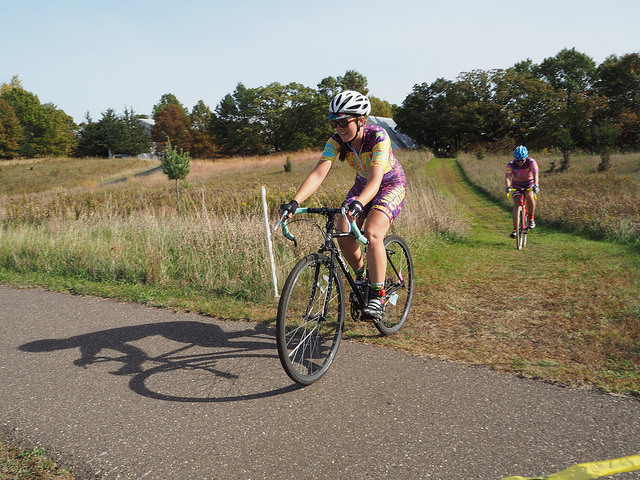 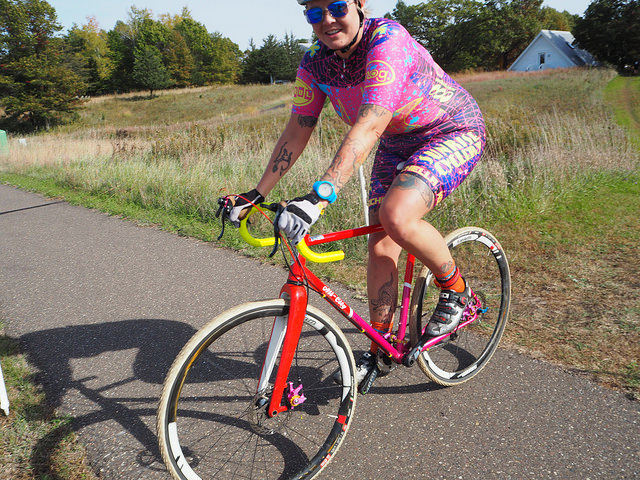 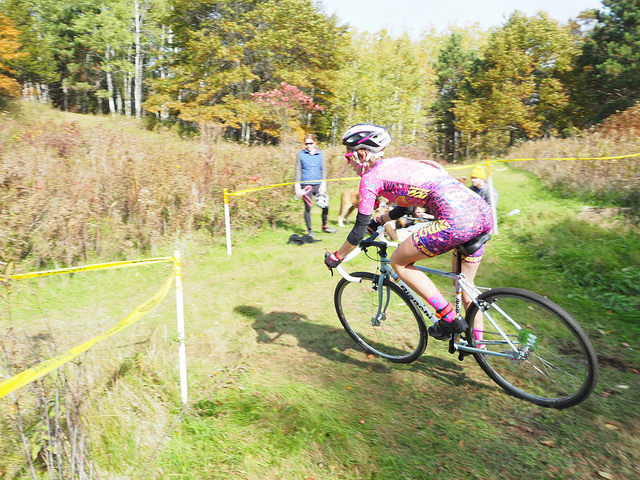 I dug how many jump barriers there were at this race. I’m into those. The woods were super beautiful and pretty fun to roll through. Cyclocross is so weird. -Sarah “Bee” Bonneville 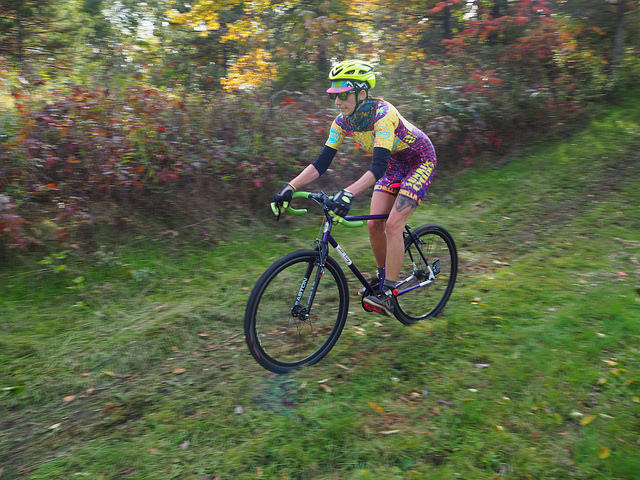 I always heard Jackson Meadow wasn’t worth racing, but I thought it had a little bit of everything, except sand; It was interesting and challenging enough. It was fun to see the Koochella ladies spread out on the course to cheer on. My most memorable moment was Crisi taking pictures of Elena & June doing yoga, which was funny. -France “Fancy” Barbeau 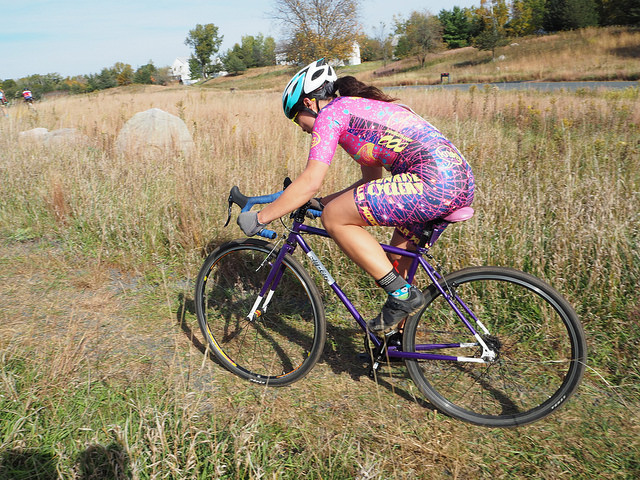 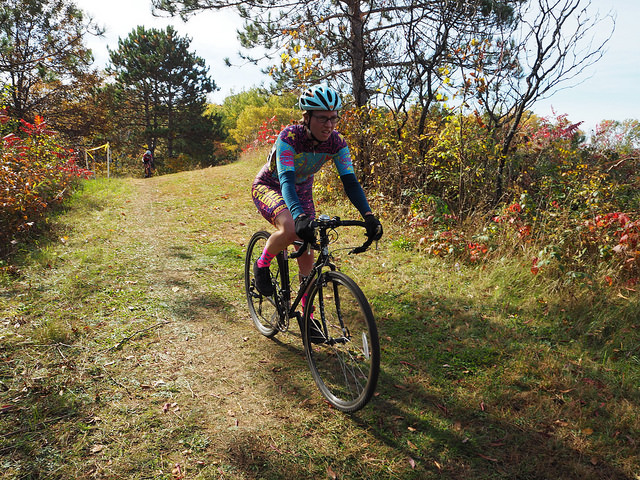 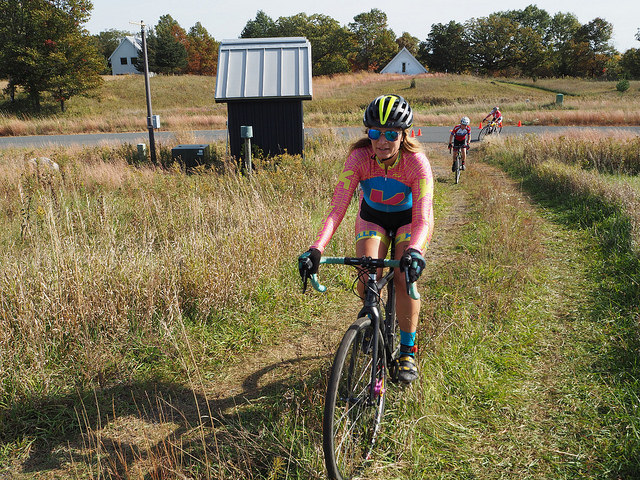 Renee “Dark Horse” Hoppe was able to hang on to the leaders for the first two laps, and held her third place position for the remaining two, securing herself a 3rd place finish in her 3rd ever cyclocross race. 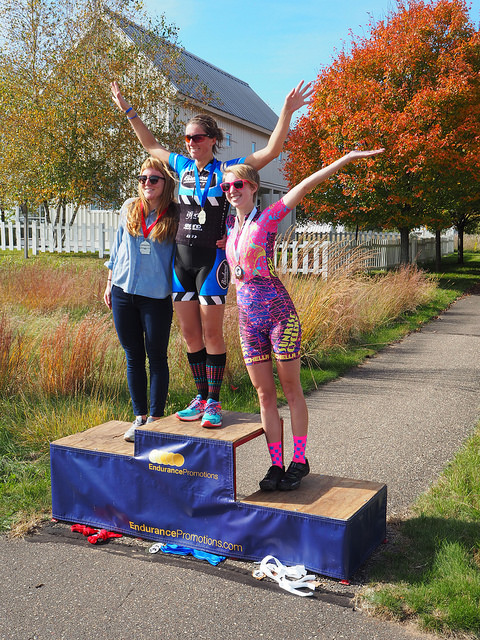 This course suited me because it wasn’t very technically demanding, but was pretty hilly back in the woods. I learned that I’m better at less technical courses because I can really push myself harder if I’m not as worried about crashing. – Renee “Dark Horse” Hoppe 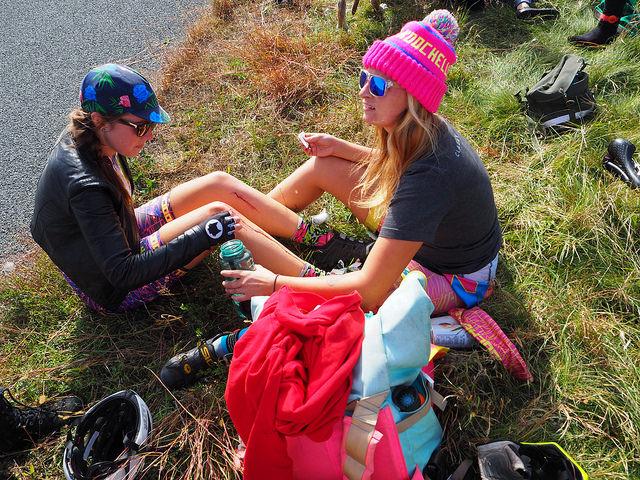 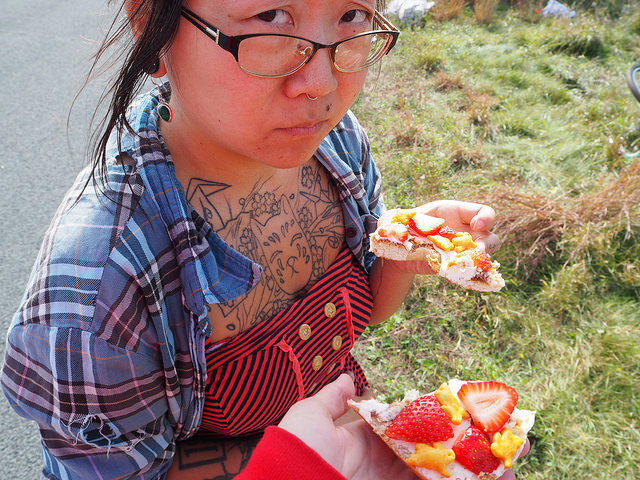 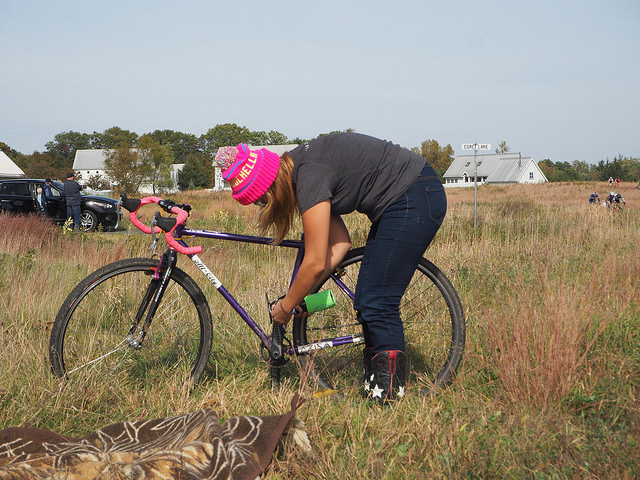 Beth “Treasure” Franklin and Tiana “T-Bits” Johnson both toed the start line of the Women’s Cat 3 race. Because of the smaller field size and fast course, they were eager to see how the race would play out. 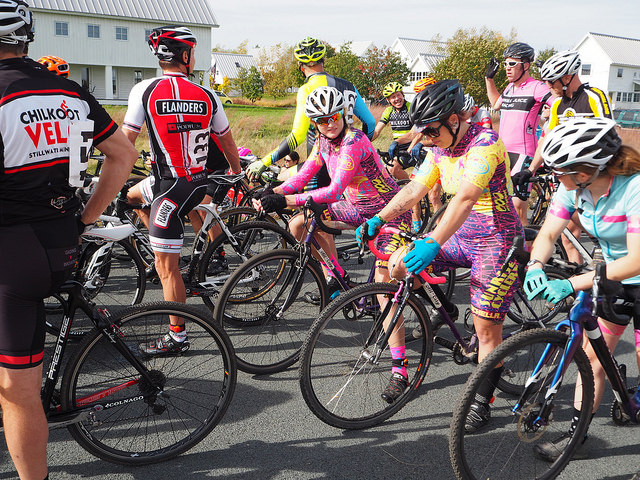 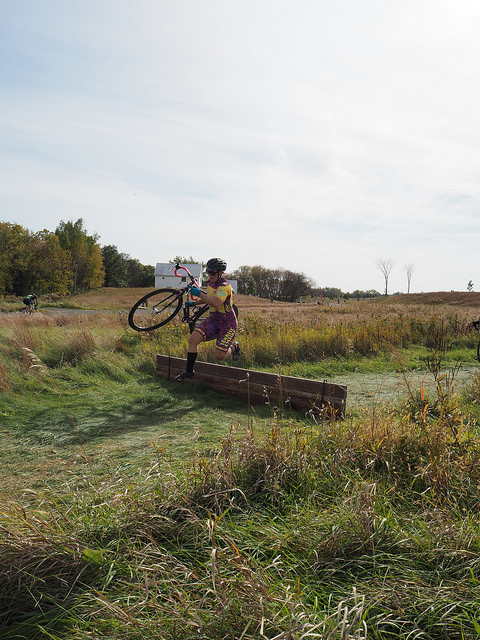 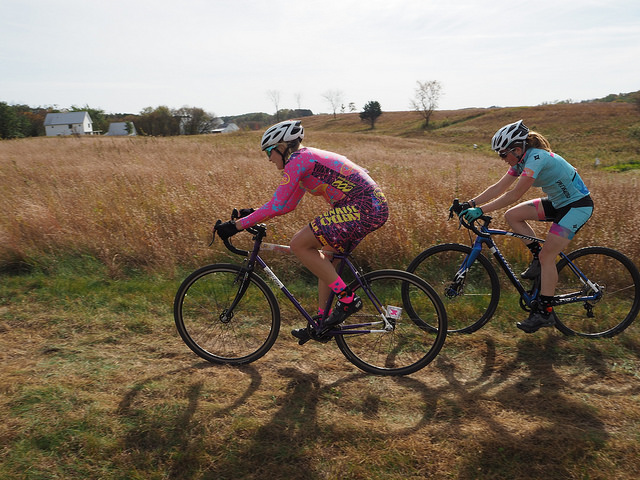 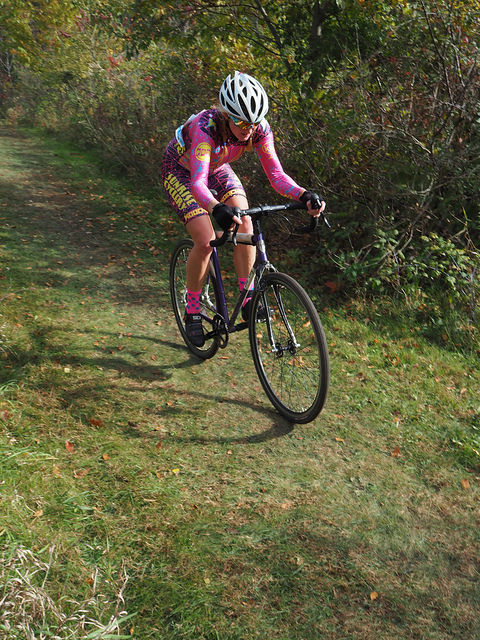 While Katie Thompson ended up crushing the competition (coming in ahead of even the Women’s Cat 2 field!), Beth stayed on her for as long as her legs and lungs would allow, snagging second place, and on a single speed to boot! 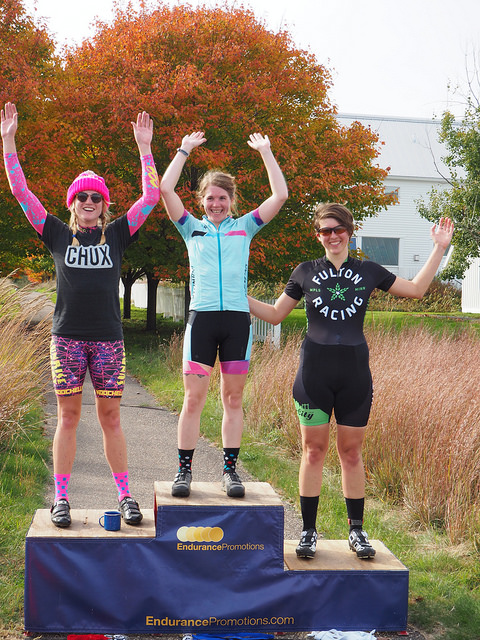 Get your weekly dose of Koochella at Green Acres this weekend, where the fine cyclocross women of Minnesota will continue to crush.