With fluttering hearts, giddy excitement, and brand new Lisa Frank-inspired cross bikes in tow, the women of Koochella flocked to their beloved velodrome last weekend. Rather than riding hard and turning left, however, they were racing through mud, over hurdles, and around sharp turns at Velo Cross, a two-day even held on the Velodrome grounds. 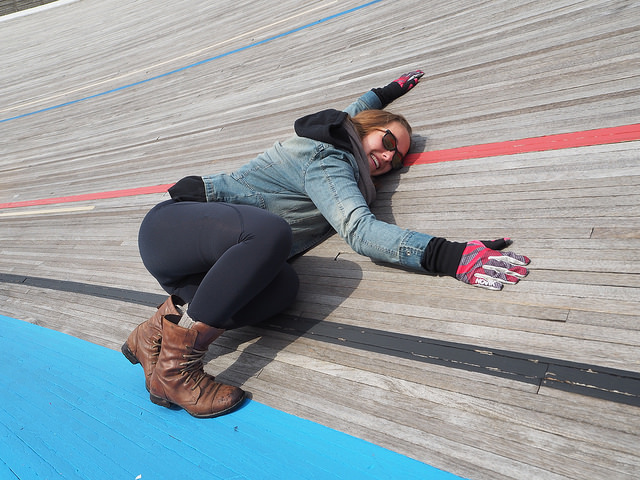 Day one provided Lilah “Fratboy” Guertin with the taste of sweet, sweet redemption.

Lined up for the hole shot knowing I had a chance at this course due to my experience. Three years ago Velo CX p/b Little Guy Racing was my first ever sanctioned race. The barriers were shallow (about 7-8 inches) allowing experienced riders to hop over with comfort. I on the other hand had almost no skills coming into cross and was intimidated by the winding course, through ditches, over barriers, off camber, soggy patches, paved patches and spectators watching my every move. Well, this year I had it in the bag. My handling skills are dope, I saw the mud and was immediately excited. – Lilah 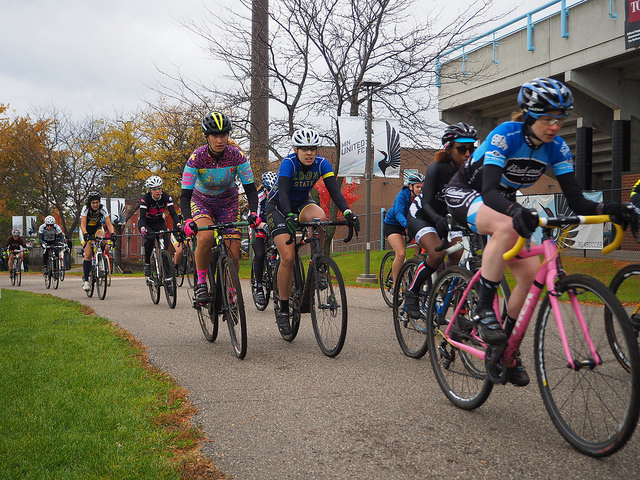 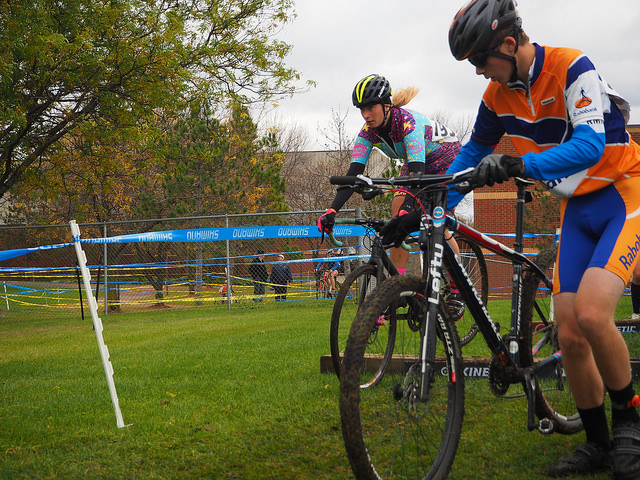 Being surrounded by a bunch of new female racers, a supportive environment, and a velodrome with an existent future made the weekend for Anna “Mama Duck” Schwinn.  This time last year, the NSC Velodrome was essentially shut down. Fortunately, however, with efforts from the Friends of the Velodrome Racing in Minnesota (FOVR) combined with work from individual teams and riders, the velodrome still stands today and has numerous seasons of racing ahead of it.

It was an overwhelmingly positive weekend for me. A year ago at this race, the NSC had voted to close the velodrome. The weather was cold and rainy. I was in mourning… especially with the track just sitting there. This year was great in contrast. Not only is the track still there, but I just had a fantastic summer of racing with a ton of new ladies… some of which were out racing cyclocross after having tried the track. –  Anna 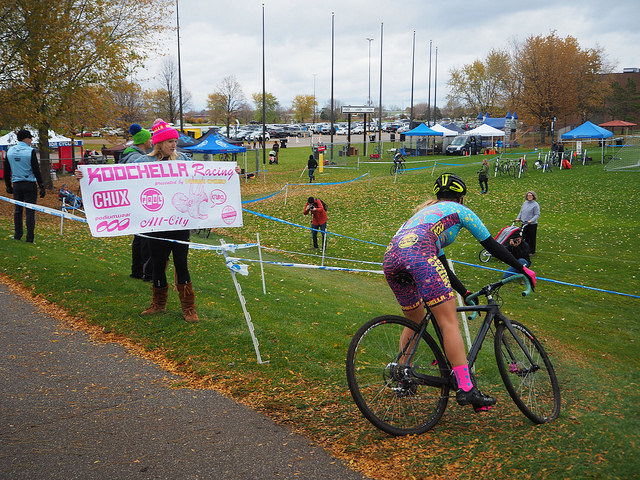 Velo Cross was an exciting weekend of racing for the team for more reasons than the mud, riding around the velodrome, and excellent competition…it was also new bike day! All City Cycles, PAUL Components, and Sunrise Cyclery all worked incredibly hard to make our dreams come true with our truly gorgeous Nature Boy 853’s and pink anodized custom brake calipers and hubs.

On Sunday morning I was stoked to race my new bike. I’d only ridden it a few blocks back and forth to Sunrise the night before, but I was already in love. As I rode with Renee to the Velodrome Lilah text me, “Get that new bike dirty!” She told me that the course was muddy and windy, but that I could ride it. The first time I went into the mud I actually had Lilah in my head telling me I could do it. Riding through the mud was a lot easier than I thought it would be – and super fun. That first muddy rut one of the spectators told me I rode it better than anyone before me – half shocked because of the gap between me and most of the field. I’m sure it wasn’t true, but it felt good anyway. – Emily 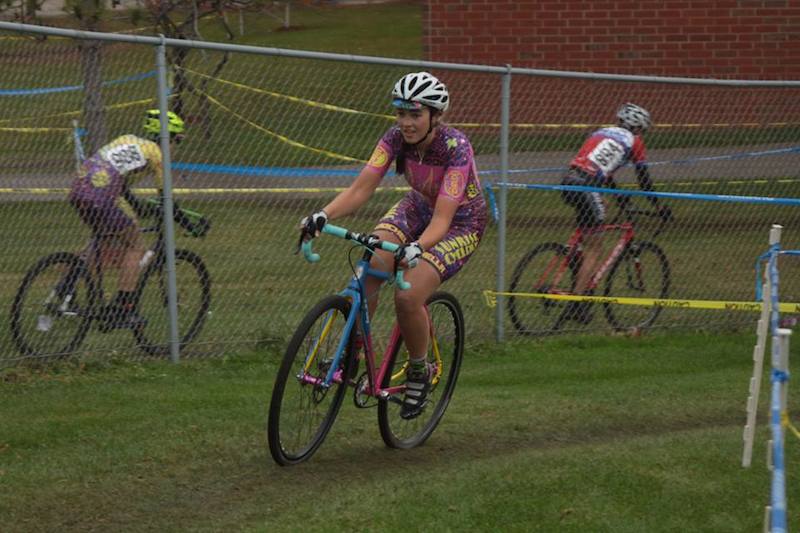 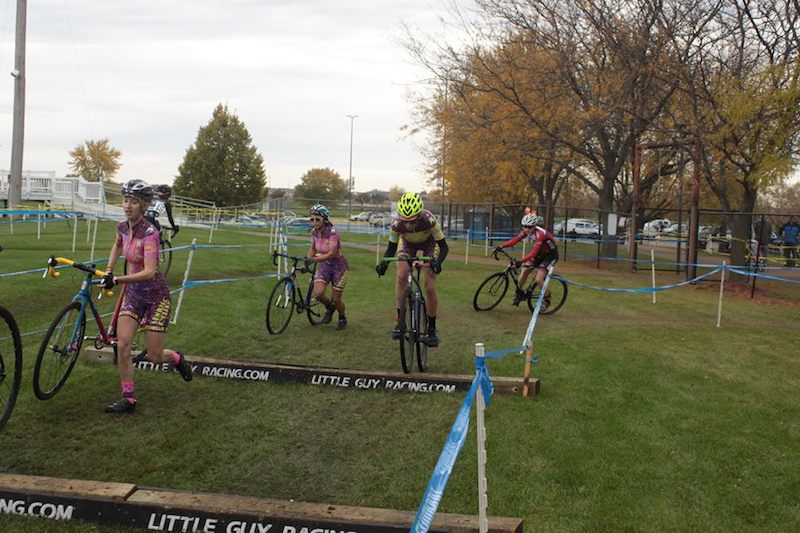 For most of the race on day two, Renee “Dark Horse” Hoppe, Sara “Bee” Bonneville, and France “Fancy” Barbeau were neck and neck. With Renee’s dominance on the hills, Sarah’s barrier hoping prowess, and France’s mud riding skills, they each excelled in different areas of the course.

This course was really fun: lots of straightaways and mud! I also totally bunny-hopped over some shorty barriers for the first time which was pretty neat! I gotta say though, racing around the outside of the track? What a tease. – Sarah 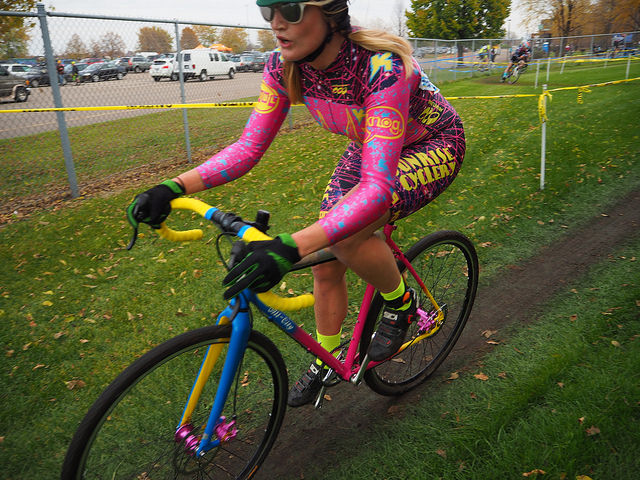 Beth “Treasure” Franklin raced both days of Velo Cross, adding yet another podium finish to her impressive cyclocross season.

I had originally planned on just doing the MWSSC [Minnesota Women’s Single Speed State Championship] race, but when I realized Denise was the only one racing in the 3’s, I figured I’d give her a little competition and signed up for that race as well! After she flatted out, I managed to get the top step on the podium…but I feel like I’ll save the celebrating until I really *earn* that top spot. -Beth 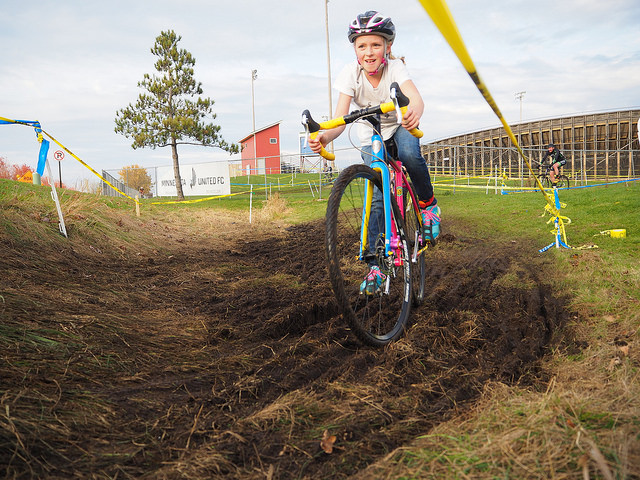 While seeing the Velodrome, riding through mud, and cheering on our fellow racers are all things that make our Koochella hearts smile, nothing is quite like getting new ladies out racing for the first time. Our good friend, 11-year old Jaya (you may know her as the girl with the trumpet at cross races) decided she wanted to try out cross racing a couple minutes before the State Champ Single Speed race. Koochella sprang into action, switching out pedals, slamming a seat as low as possible, finding a helmet, and pinning numbers to get Jaya out on the course in time while her dad sprinted to the reg tent to get her all registered. Like a champ, she rode the full 45-minutes, plowing through the muddy pits, leaping over barriers, and mounting her bike better than most adults do, earning “Top Rookie” and her own podium. Way to crush, Jaya. We can’t wait to see you develop as a rider!

To see the full album from Velo CX, visit our flickr.