Our ringmasters for the weekend were none other than Tiana “T-Bits” Johnson, Beth “Treasure” Franklin, and new kid Emily Wade.  The three crushers spent months scheming with France “Fancy Pants” Barbeau to make an event that equally reflected Koochella’s hard exterior and tender heart.  T-Bits even lost some sleep over it.

Night one started with a meet up at Cherry Cycles, a back alley bike shop in Loring Park owned and operated by one of the raddest WTFs around.

Around 9 PM Tiana, Emily, and the Tiny Terror headed off to an undisclosed location with friend Altan Gurel to set up the course for a fixed gear criterium.  The team finished chalking routes and placing glowing pink cones just in time for the racers to arrive.

The competition was fierce as racers on all kinds of bikes clipped corners at break neck speed.  All in the name of these Phil Wood hubs graciously donated by the 2015 All City Championship.

After ten laps local trackie Zak Mohr and our very own T-Bits took the top prizes in the men’s ad WTF categories, respectively.  The crew basked in the glory of the first successful fixed gear crit in Minneapolis in years.  Then they headed over to Sisyphus Brewing for drinks as mythic as the night. 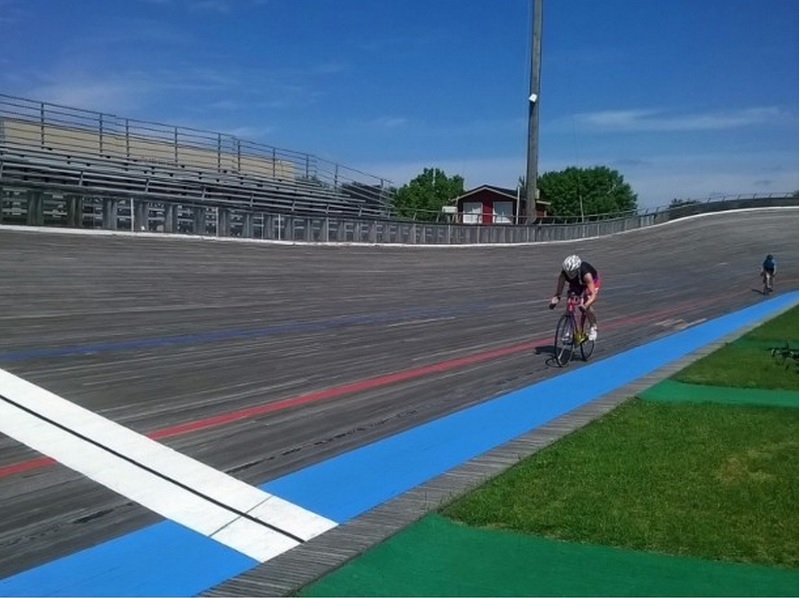 After a few hours of sleep, the team headed to the NSC Velodrome where they worked on sprints for three hours.  Yep, three.

Track practice under their belts, the girls hurried back to the Twin Cities for a few last-minute alley cat preparations.  Racers began rolling in to Koochella shop sponsor Sunrise Cyclery at 4:30.  Among the herd was Kat McCarthy, local Sh!t Goose racer and co-organizer of  the original Minneapolis babe fest, Babes in Bikeland.

Koochella was also stoked to see their friends from the Hub Cycling Team #babetrain roll in to registration. 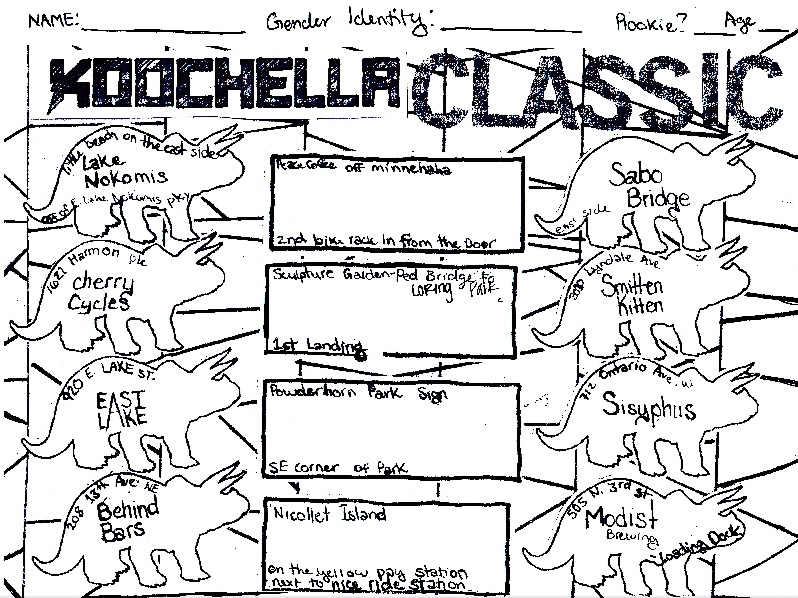 Riders were given a spoke card, a crayon, and this manifest.  The crayon was to etch over stickers carefully placed on each of the unmanned bonus stops, listed in the center column of the manifest.

With the rest of the team posted at stops around the city, Beth and Tiana sent off the racers just after 6 PM.

Like most things Koochella does, the alley cat stops were totally boring.

Local legends Ben Laugerquist and SK were the first to roll in to the final stop in the Chrome MPLS back alley.  The pair finished at 6:53 PM and 6:55 PM, respectively.

Ben’s finish was good enough to earn him first place in the men’s category.  You could say his teammates were pretty stoked.

With prizes from a slew of incredible sponsors including Trash Bags and Knog, the excitement was understandable. 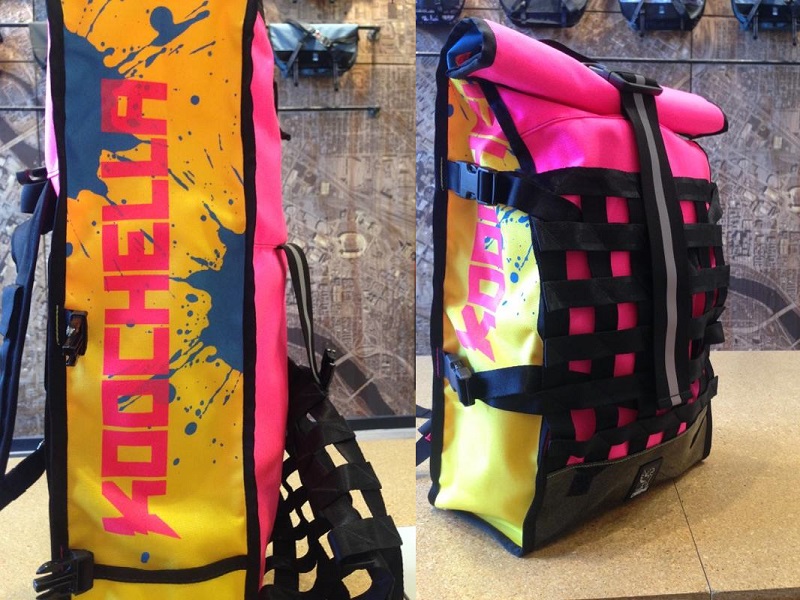 But the most coveted prize of the night went to the WTF field with this Chrome Custom Barrage made by local sewer Rachel Dye.

The first WTF prizes of the night went to Kristin Greeley and Airen Bijou, a time-tested alley cat duo that pre-dates Kristin’s status as a crusher at the NSC Velodrome.

Then came Koochella’s favorite prizes:  WTF & men’s Overall Crusher.  These high profile titles went to individuals who raced both the crit and the alley cat.  While neither competitor took the top title in either race, they beasted both nights leaving nothing on the courses but their warm smiles and positive energy.  As Emily said when presenting the awards, “They did it Koochella style.”

Men’s crusher went to Minneapolis courier Jeff O’Neil who took home the golden wheel from Behind Bars.  He also scored some beer from East Lake Brewery, which he poured before leaving the podium.

WTF crusher went to Lee Pen.  Lee took third in the crit, and raced the alley cat with only 30 seconds to route.  Shout-out to Fratboy for the podium assist.

A total powerhouse, Lee remembers thinking to herself how much she wanted the Chrome bag, but knowing there was no way she could win it.  Surprise!

After awards, the party raged on well into the night.  There was dancing, picture taking, and even some back alley bmx shenanigans.  Koochella had so much fun they’re thinking about hosting another Classic next year.  Maybe.

2 thoughts on “First Ever Koochella Classic”