Warning: "continue" targeting switch is equivalent to "break". Did you mean to use "continue 2"? in /homepages/37/d256256774/htdocs/Koochella/wp/wp-includes/pomo/plural-forms.php on line 210

Warning: "continue" targeting switch is equivalent to "break". Did you mean to use "continue 2"? in /homepages/37/d256256774/htdocs/Koochella/wp/wp-content/plugins/jetpack/_inc/lib/class.media-summary.php on line 77

I thought we might have a mild winter this year in Minneapolis. (So hopeful, so naive.)  I’ve spent most of my life in Michigan and upstate New York, insulated from bitter temps by giant lakes. I can blast through looming snowdrifts in my little Toyota Corolla without flinching. I have mastered winter? Not in Minnesota and not on my bicycle. So in January I signed up for an 8 week spin class led by a local cycling coach. The class would be 90 minutes long and structured by intervals for building endurance, power, and mental focus. It would be for cyclists by a cyclist. 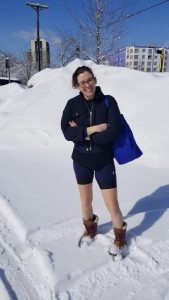 I (my name is Anna) could ride in this snow, or I could not [image description: full shot of woman standing in freshly fallen snow in bike shorts and winter boots, laughing]

In November I had just finished my first ever season racing (cyclocross) and wanted to build on the fitness I developed during the season. I planned to be that hardcore commuter and winter rider after the two less-than-committed winters I’ve spent in MN so far, but that plan quickly fell apart once extreme cold and record snowfall arrived. I have no trainer, cycling computer, power meter, or online training platform, which are all very expensive separately or together. Spin class was going to give me the opportunity to ride 20-25 miles a week indoors as well as use technology and training metrics for the first time without buying new equipment.

In class we use the STAGES training platform, bike, and power meter. The class is located at a YMCA and registration was open to nonmembers (me). I spent a couple of classes dialing in my fit on the spin bike. Everything is adjustable, so you can wiggle and slide all the components around to approximate the feel of your IRL bicycle. I’m in the middle of my second 8 week session right now and I finally feel like I understand how all the numbers we train with work together. My power numbers have finally improved! I don’t want to admit how much I’ve fallen for the numbers . . . To my surprise, I felt fine working out with a bunch of other folx. (Usually I ride alone.)  The bikes are well-spaced, and everyone in class is working/suffering by their individual metrics together, which I find motivating. Spin class is like riding a bike! But there are no weather or scenery or bumps or stops affecting my ride. 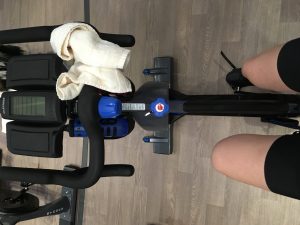 Warm-up [image description: shot from above legs in bike shorts on a spin bike]

That might sound boring, but I do find enough stimulation in class to focus for 90 minutes. The bikes face a projection screen where all participants’ power percentages are displayed and the computer on your bike shows your speed, cadence, watts generated, calories burned, and so on. Because of this class, I now know what all these training words mean and how they relate to my individual capability.

I figured out my preferred numbers about a month into class: my favorite cadence, when to focus more on pushing or on spinning, etc. Each session I complete a three to four minute FTP test. I ride as hard as I can sustain for that period of time, which determines the maximum 100% power (measured in watts) I can sustain for 20-60 minutes (there is an equation for this; STAGES calculates). That’s the number that the intervals for the rest of class will dip below and above. I’ll ride for a period of time at 80% of this wattage, then 90%, then 100%, then 50%, then 120%… You get the idea. And then I leave class feeling like a wet noodle, yet refreshed by own sweat and endorphins. 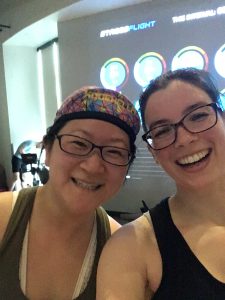 Bri and I smiling and sweating after spin class [image description: close-up of two smiling people in a room of spin bikes]

I was becoming very frustrated from class to class when my numbers were not increasing despite feeling stronger and putting out what I perceived as increasing efforts. As it turns out, looking at what the computer says I’m doing is the main difference between just riding my bike outside and doing whatever I think is a challenging ride and training. Riding with the technology in spin class has changed the way I will approach riding. While I ride bikes because I love riding bikes, I love more and more the work I can put into riding my bike. I see myself spinning next year, but in the meantime I’ve been setting tip money aside in a jar (really) to buy a cycling computer, accompanying sensors, and heartrate monitor to help me train. Another day, another dollar, another ride.