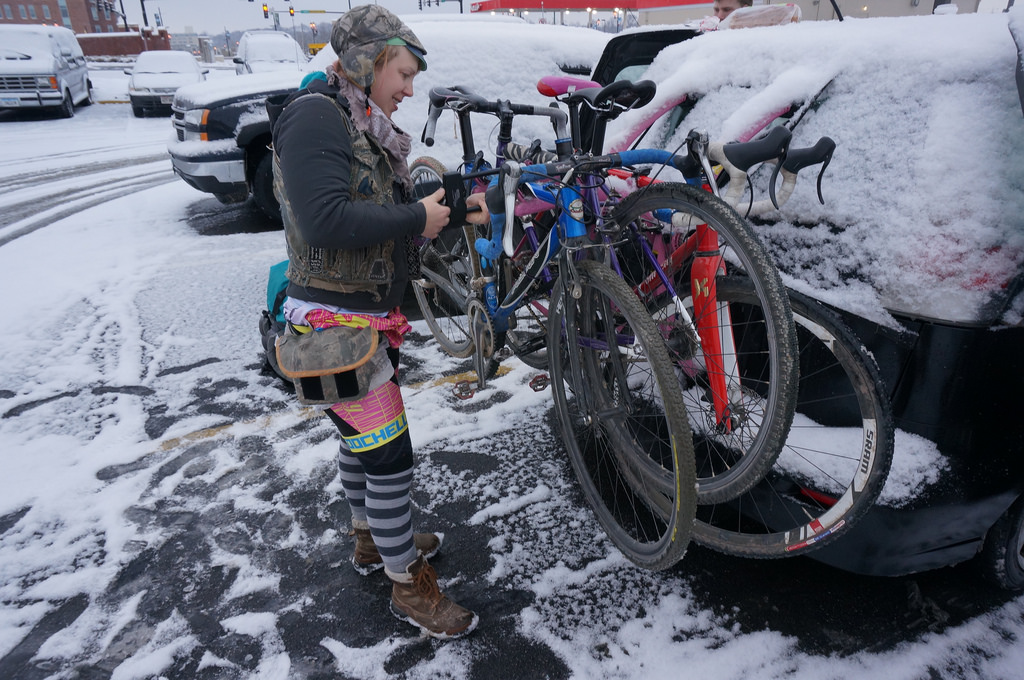 Last Friday, Tiana and I drove down to Iowa City for Jingle Cross.  We were accompanied by our old friend Erin (Second Chance p/b Zubas) and our new friend Rhys May (Loose Nuts) from Georgia.

I had managed to talk Tiana into going, despite her being very sick.  And injured.  And exhausted from her day job on the streets as a super cool bike messenger.  I had even made her take an ice bath the night before… which had only made her more sick. 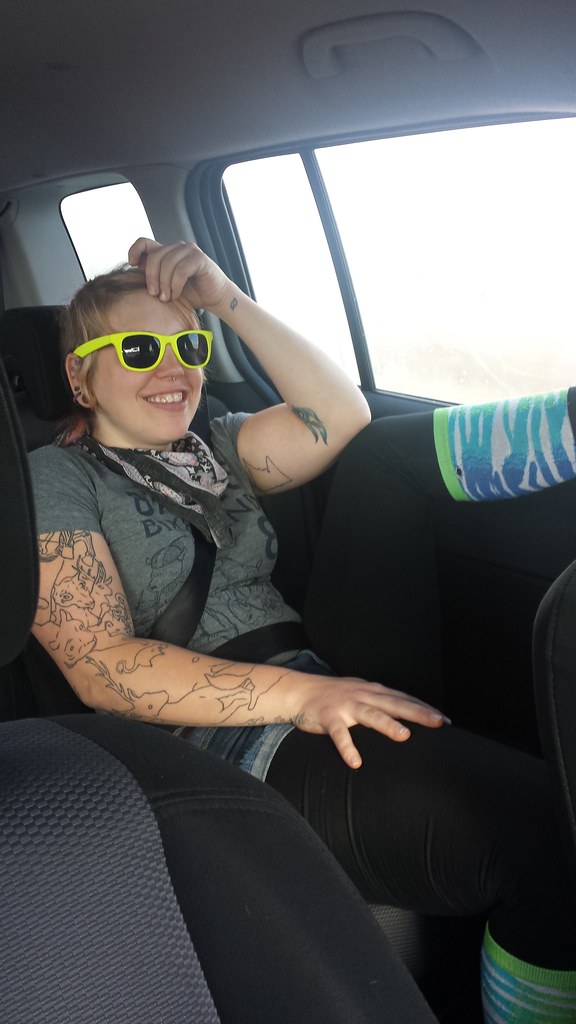 We didn’t arrive early enough to race on Friday. We raced on Saturday but didn’t have a camera (and couldn’t poach pictures from our friends).

Tiana, who coughed her way through the night, finished a respectable 10th out of 25th, her hand swollen to the size of her gloves by the end.

I finished a few spots behind her (after nipping Valerie sprinting at the finish) after a few technical difficulties with apparel, namely my legwarmers fell down and stuck in my chain a few times. After almost biffing it on a downhill for this reason, I vowed to not wear them for Sunday. Embro would have to do.

We went to breakfast at Bluebird. Note the straw wrappers (which we promptly shot at one another, because we’re all adults). 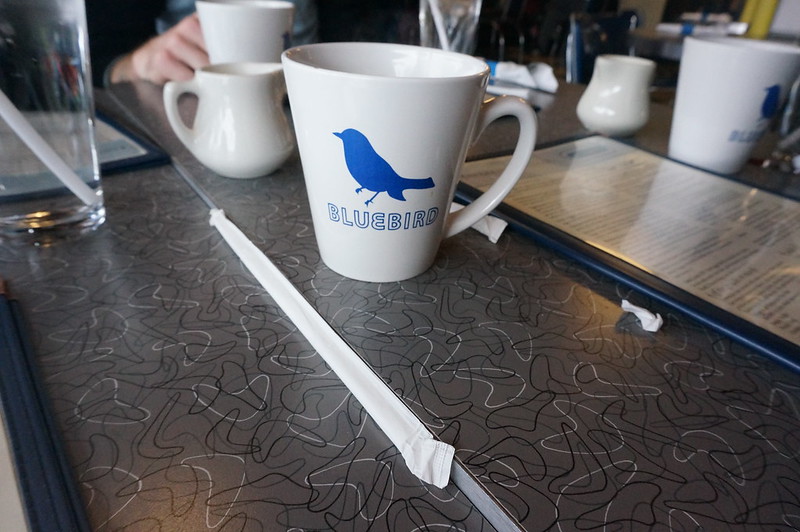 Tiana and I ordered the same breakfast.  Already in Hero Mode, I handily won. 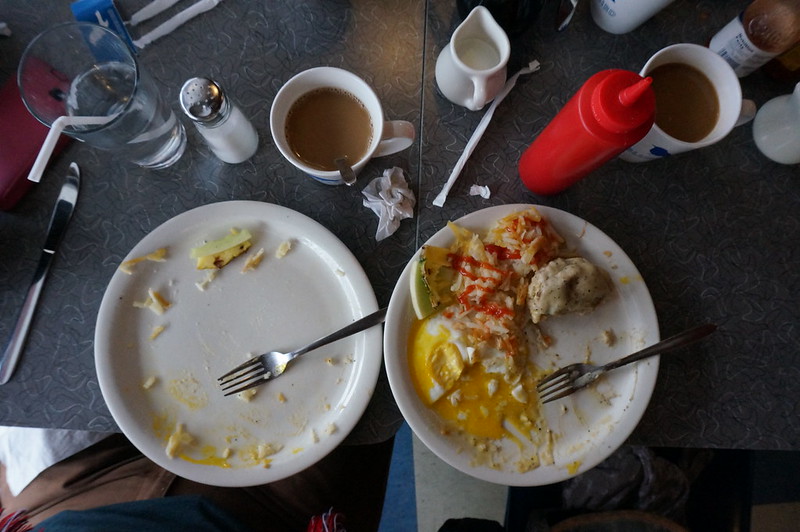 At the event, we ran into friend of the show, Fattie, seen here crushing a piece of breakfast pizza. 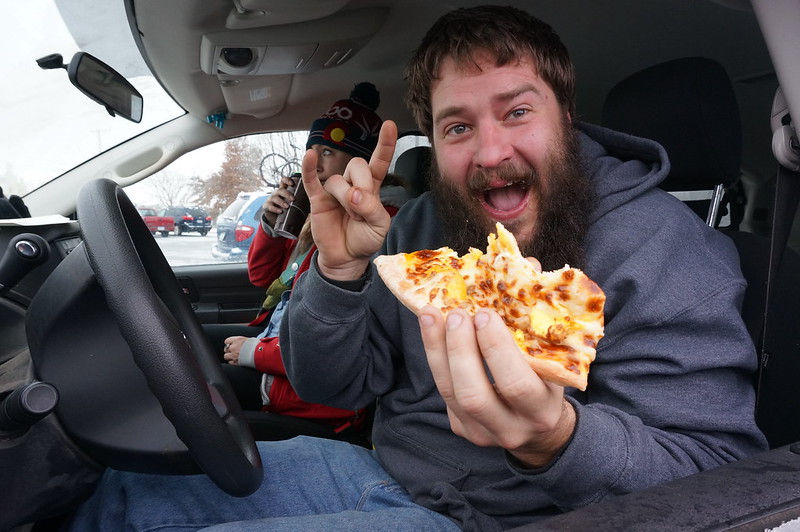 The Minnesota Tent Complex was packed with friends and aggressively heated (thanks for inviting us to hang out, guys!).  Everyone was excited because, well, we’re pretty good at snow… and over night we had received a respectable few inches of it. 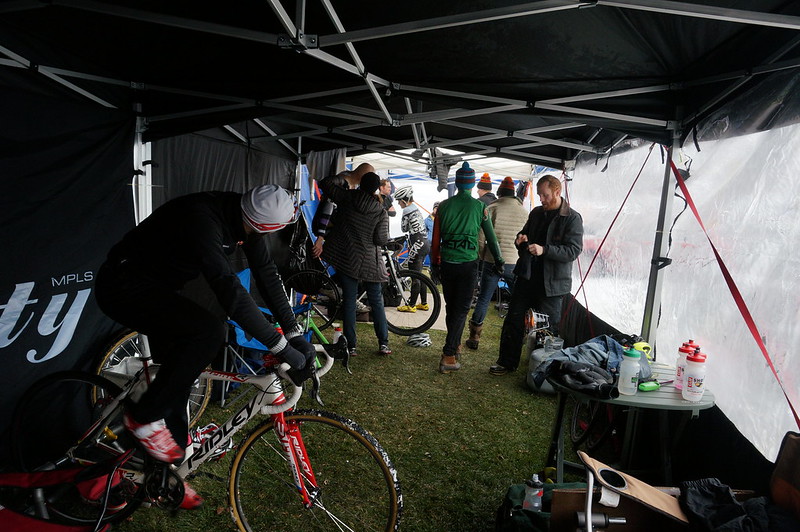 And it was cold enough to stick around.

Tiana suited up but couldn’t race.

I, burned by my legwarmer experience the day before and apparently unaware of how embrocation works, put a thick layer of embro pretty much everywhere. Here is me at the start, completely unaware of the burning that would come. 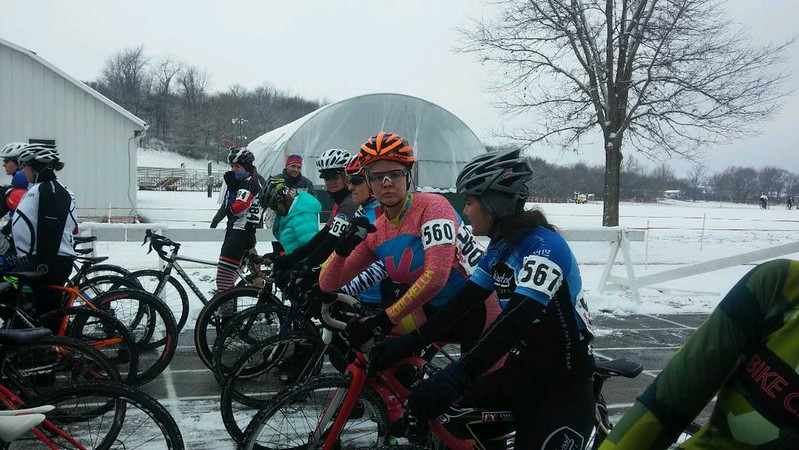 Fortunately, most of the major right turns on the course were banked.  I can counter-steer left all day long, it’s what I do all summer at the track.  Counter-steering right, however, is much more challenging.  I fee like Zoolander. 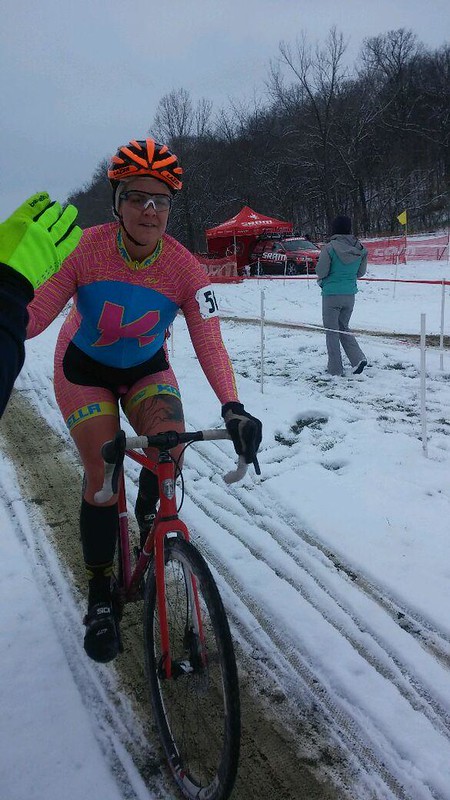 I was delighted to not have crashed.  Still high-fived every kid with a mitten-out.  Maybe even had a good time… and rocked some lobster red legs. 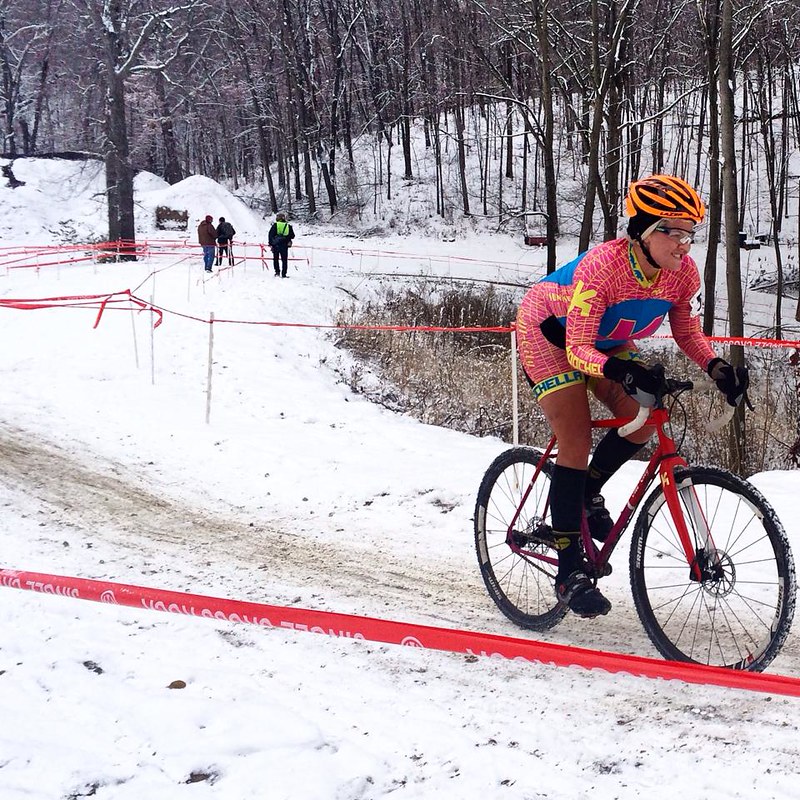 Then Rhys got on the course.  Being from Georgia, Rhys was a little less experienced with riding on snow. 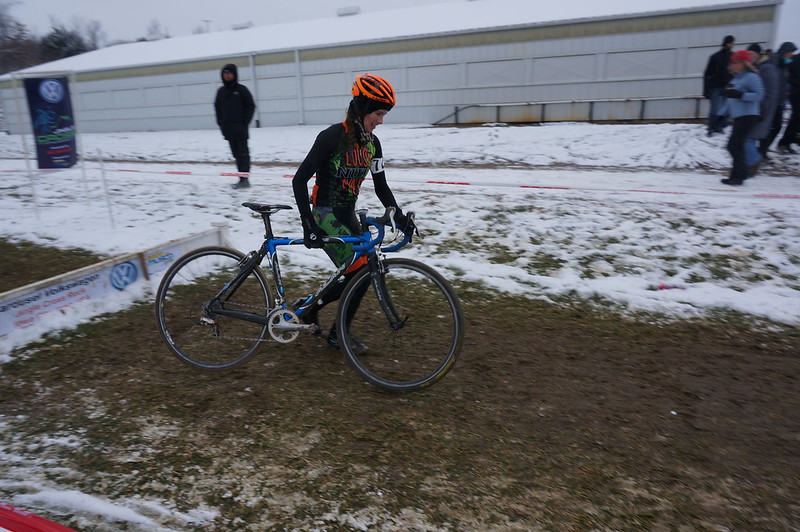 She crashed five-seven times (depending on who she was talking to…) but just kept getting back on it. You can’t keep this girl down. 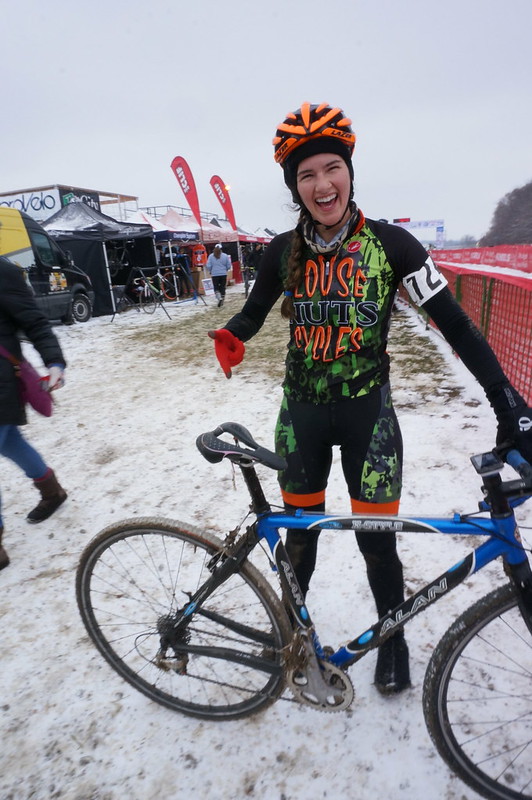 The last crash twerked her saddle… just a little bit. 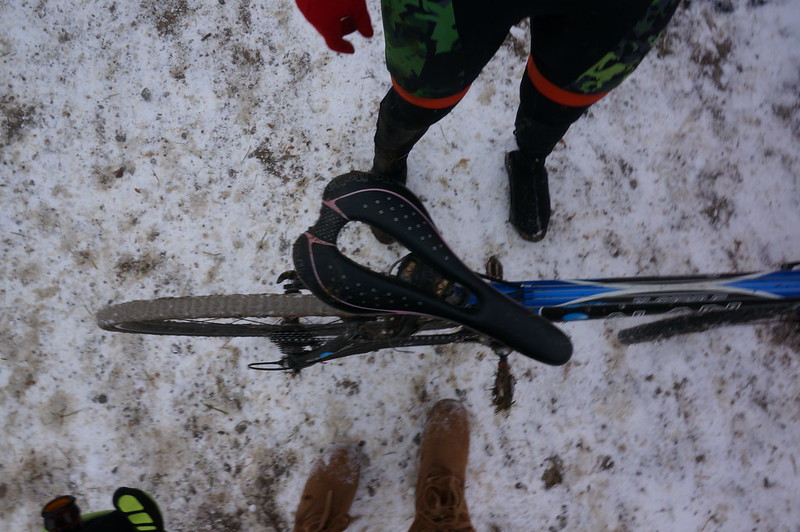 Other friends of the show:
Craig Whatshisname being all fast.(Raleigh or something) 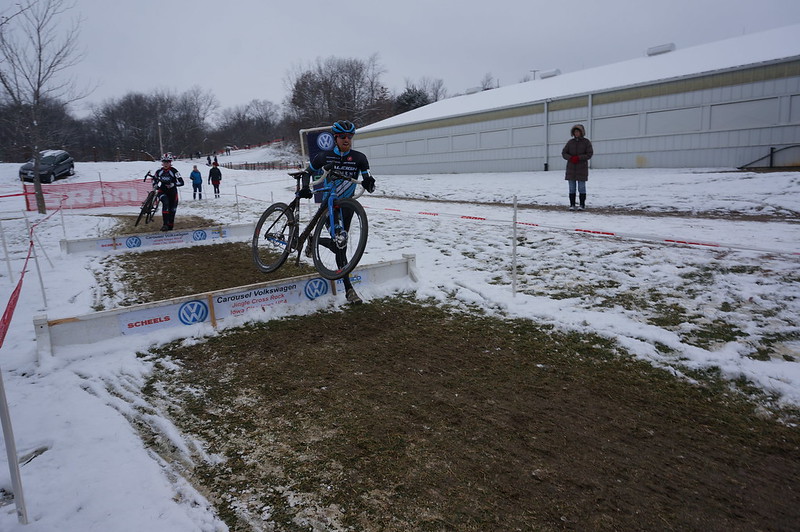 Heidi Goodson (Birchwood) having one of the best races yet.  She looked great! 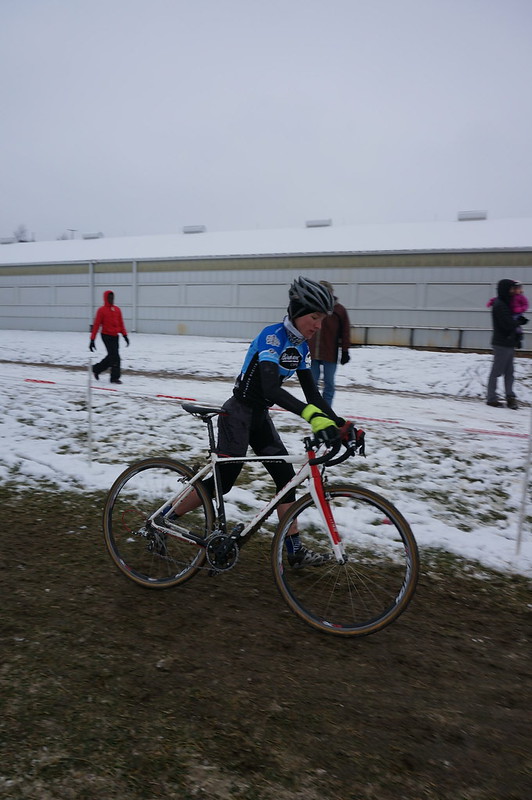 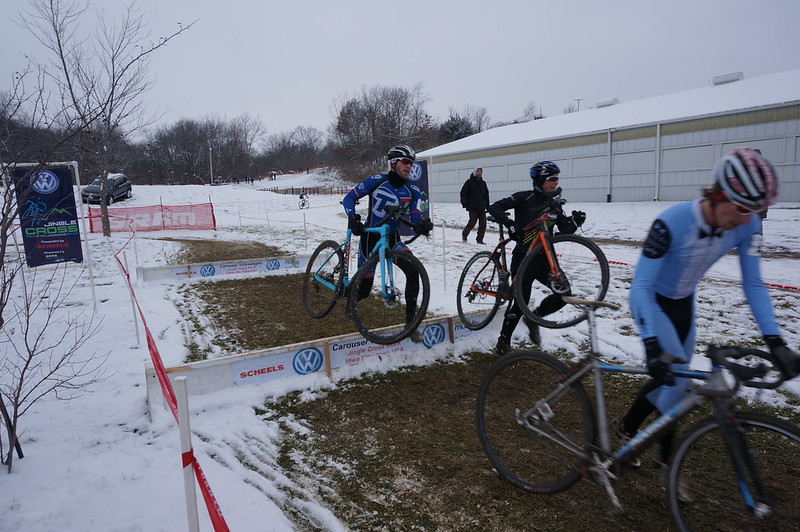 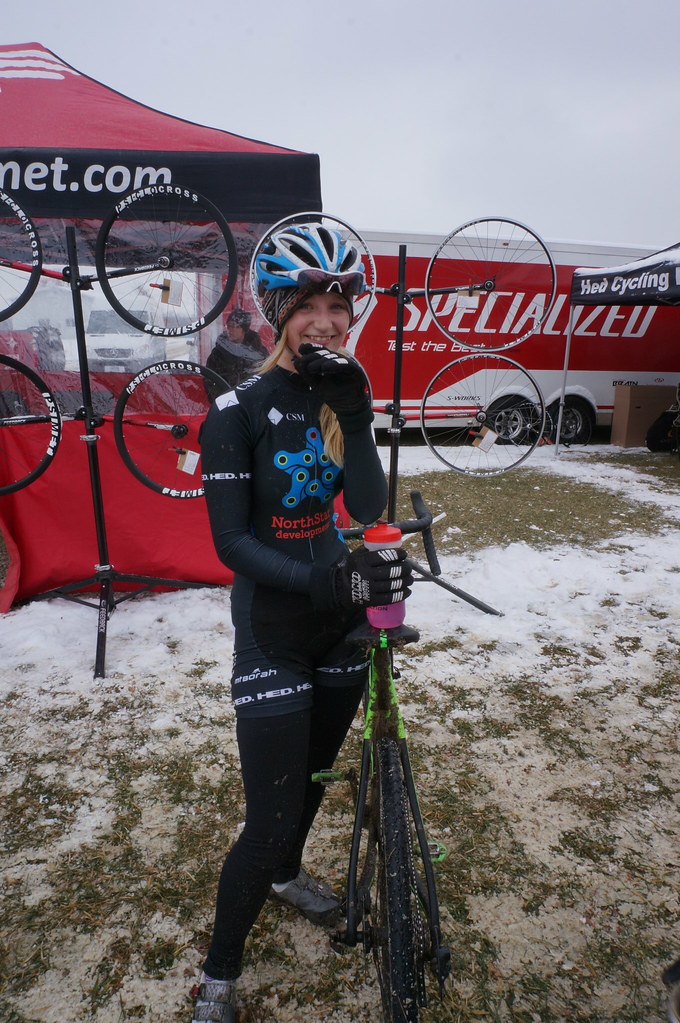 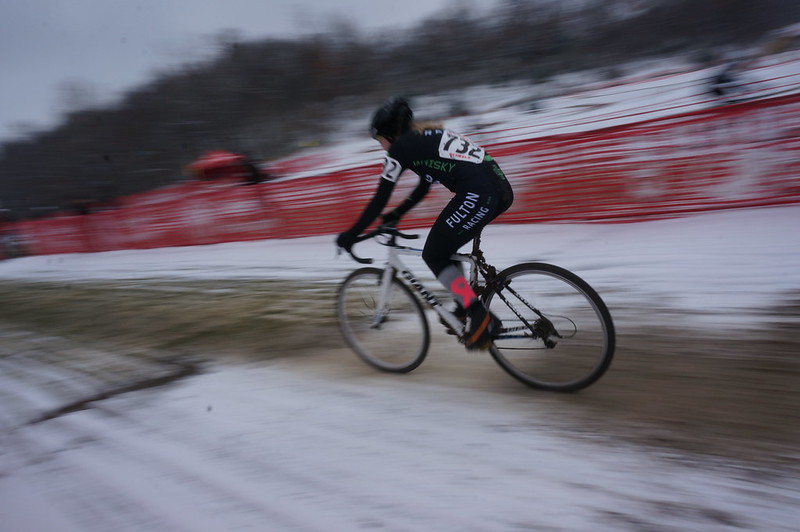 And Chelsea’s boyfriend, Jeff (also Fulton), seen here clearly taking the race seriously (probably because Chelsea was way ahead of him). 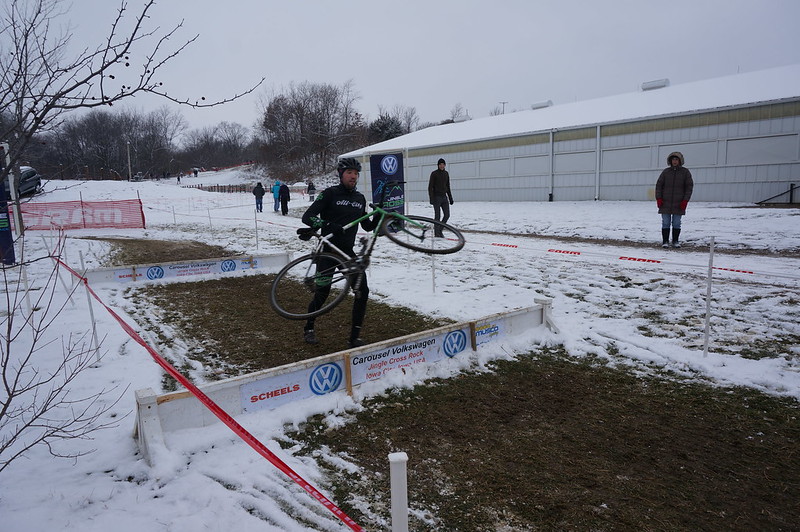 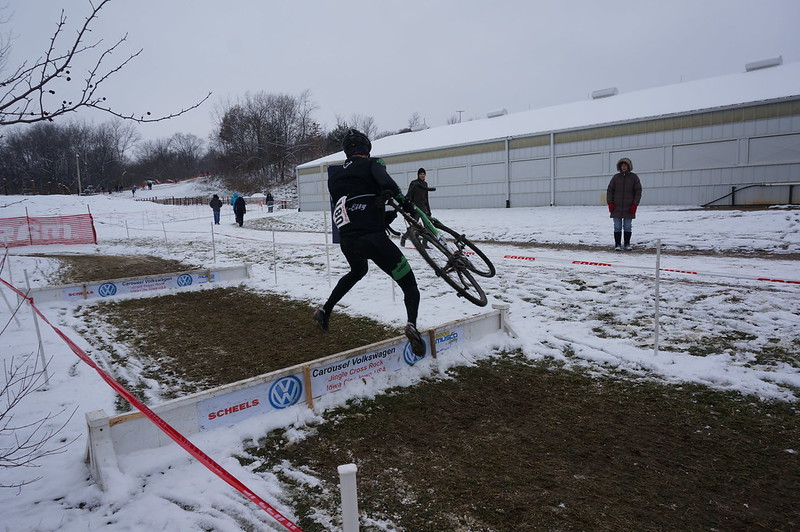 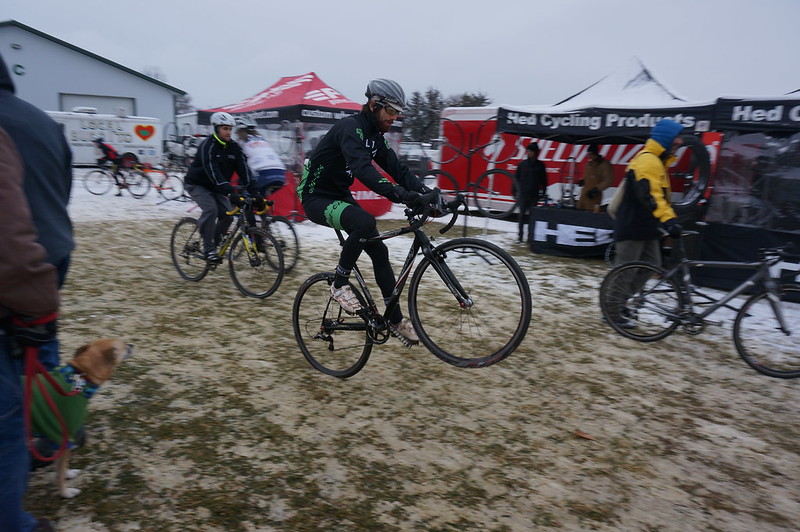 Anyway, we had a ton of fun and look forward to doing this next year with a bigger, better crew. 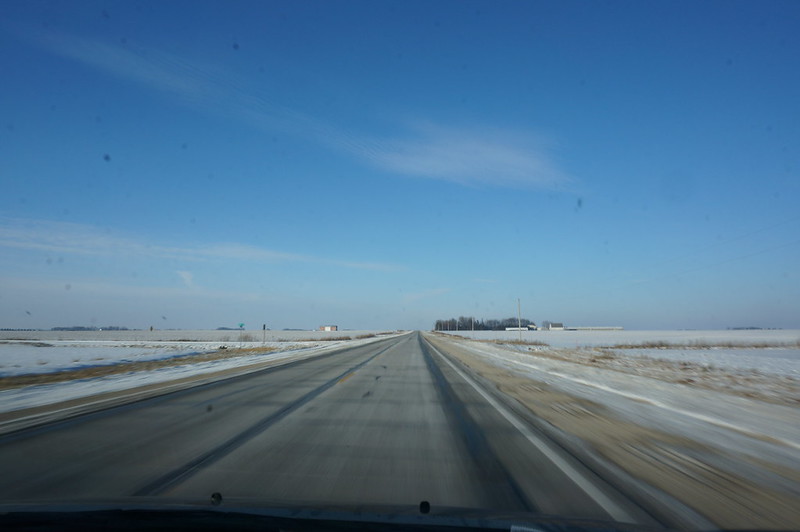